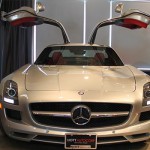 11. Alfa Romeo 4C – Not the fastest exotic in the world, but certainly a rare beast in Winnipeg. The bulging lines and aggressive proportions on this mid-engined two-seater are a love-hate proposition, but most of [...]