Our service progessionals answer your questions.

11. Alfa Romeo 4C – Not the fastest exotic in the world, but certainly a rare beast in Winnipeg. The bulging lines and aggressive proportions on this mid-engined two-seater are a love-hate proposition, but most of us love them so we thought it deserved a spot on this list. Estimated retail price: $80,000.

10. Lotus Elise
A direct competitor to the #11 car, this beautiful Lotus Elise was simply passing through Winnipeg on an enclosed shipping trailer when it made a pit stop at Nott Autocorp en route to Edmonton. The engine doesn’t sound supercar worthy, but the1.8L 4 cylinder making just 190 hp propels the ultra lightweight Elise from 0-60 mph in a scant 4.9 seconds; plenty quick for Winnipeg.

9. Audi R8
One of the major challenges of having a supercar in Winnipeg is that there aren’t very many reputable shops to service them. Major service or warranty work can mean shipping your supercar to the nearest dealership most likely Calgary and sometimes Toronto or Vancouver. What makes the R8 such a great supercar for Winnipeg is that we can do almost any service required right here at Nott Autocorp, and the local Audi dealer will handle warranty repairs. Price tag: $115,000.

8. Ferrari F430
If you live in the southwest quadrant of Winnipeg, you’ve probably seen a few red Ferraris cruising the neighbourhood. But this F430 owner decided to choose an unconventional baby blue wrap, making his coupe instantly recognizable and unique.

In the past year, Nott Autocorp had two Ferrari F430 Spyders (the convertible) come in and roll off of our lot – both of which had black exteriors. For your boldness, we salute you blue Ferrari owner!

7. McLaren 650S
Sometimes we cringe at the thought of starting nice vehicles in the dead of winter and driving them down Winnipeg’s notoriously icy streets. But one Winnipegger runs his McLaren 650S year round as a daily driver! This beauty has been spotted in South Tuxedo and Headingly, MB.

The mostly composite body shouldn’t be too affected by the salt on our roads. Let’s hope he has a block heater for his McLaren for the inevitable -30C days.

Estimated retail price of this daily used supercar is $200,000+. 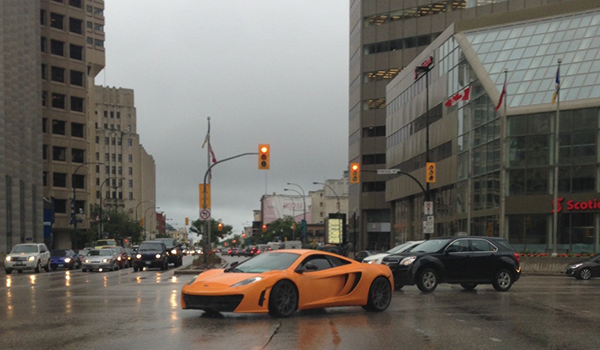 6. McLaren MP4-12C
This could be one of the most photographed supercars in Winnipeg. Probably because 1) it’s flashy and 2) it’s shape screams supercar.

This beauty belonged to a friend of Nott Autocorp. In fact we currently have the owner’s Aston Martin Vantage on consignment. Unlike some of the supercar owners who have their own YouTube channels, this guy is humble and down-to-earth.

We’re proud to say this this McLaren MP4-12C joined us at Driven Show YWG 2016 located at the Red River Exhibition Park where we had other great cars like the Tesla Model S, Tesla Model X, Audi R8, a rare Porsche Panamera E-Hybrid and an Aston Martin.

Sadly, this Winnipeg supercar now has a new owner and you probably won’t see it in town anymore.

For more information on our appearance at Driven 2016, visit our Facebook page at www.Facebook.com/NottAutocorp

5. Mercedes-Benz SLS AMG
With a 6.2L V8 engine, 653 HP, red interior and those amazing gull wing doors, you can expect to get some photos of you on the internet when you drive this around a small city like ours. This was one of our all-time favorite pieces of inventory.

Truth is, Nott Autocorp doesn’t know a lot of back story to this Huracan. Usually, we can connect the dots using our supercar intuition. But this one is still a mystery to us. Nonetheless, we adore the beauty of this Lambo. 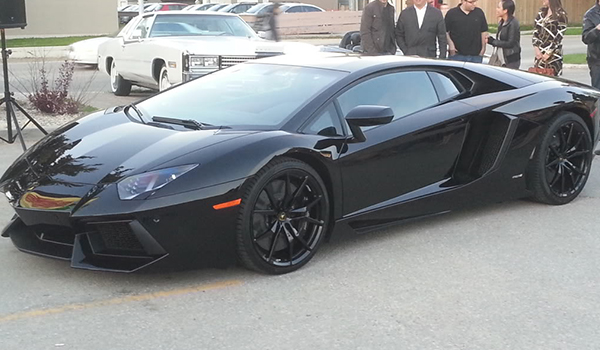 3. Lamborghini Aventador
Okay okay! I know most Winnipeggers didn’t expect to see this one in Winnipeg, but this Aventador is pretty amazing. With a 6.5L V12 engine, 739 HP and a top speed of 370 kph, this thing is borderline hypercar. 0-60 mph may not happen in exactly 2.9 seconds on Winnipeg roads, but you won’t care.

Theoretically, if you launched from the intersection of Portage & Main heading west at full throttle, you’d be going 250 kph by the time you hit the MTS Centre. 250! Although we don’t recommend trying that, it’d be amazing to see this Aventador use it’s full potential on track.

According to TopTierImports.com, the owner of this Aventador shipped this beauty to his other home in Florida. I assume there are probably fewer potholes in Florida. Good choice. 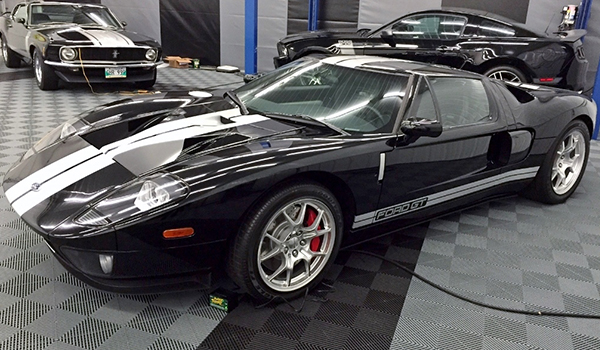 Believe it or not, this 2006 Ford GT only has 240 km and is practically brand new. The owner is located here in Winnipeg and takes care of this super mint GT in his Wellington Crescent home.

Since Nott Autocorp listed this pristine supercar, it has created quite a buzz across the country. Within days other owners of low mileage Ford GTs, dealerships and private sellers alike, began listing theirs at the same price.

Since rolling off the dealership lot, the Ford GT has steadily appreciated in value. From an MSRP of $150,000 in 2006, some have climbed as high as $500,000.00 in 2016. Who would have guessed that the best investment car in recent history would come with turn signal stalks from a Ford Focus? 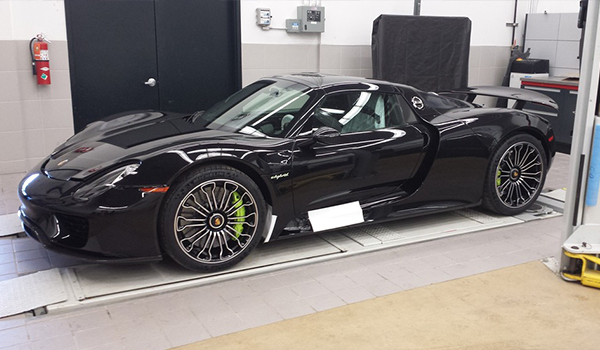 Not even a supercar… a HYPERCAR. Absolutely one of the rarest car sights in Winnipeg, this Porsche 918 Spyder is one of the fastest cars in the World.

How is that you may ask? Well, the Porsche 918 is an e-hybrid that switches between electric and gasoline mode.

Our visit to Driven Show 2016 proved that fully electric vehicles – like the Tesla Model S we brought – are some of the fastest off-the-line cars produced in the world. With the Porsche 918 being an e-hybrid, this means that all the battery power is available at the gas pedal immediately, with power from its V8 gasoline engine adding to the mayhem.

The 918 has been described as having a ‘rocket engine’ that is amazingly responsive and gets off the line surprisingly quickly for a V8. With regenerative braking, you can expect a fully charged battery just driving around. At the end of the day, this elegant Porsche 918 is faster than a Bugatti Veyron on the track. Think of that for a minute! The World’s fastest top speed hypercar – the Bugatti Veyron, with over 1000hp – is dwarfed by this amazing Porsche 918 Spyder.

Just to blow your mind a little bit: A Porsche 918 could get you from downtown Winnipeg to Polo Park in less than a minute at top-speed.

If you ever see a rare supercar, feel free to email our Chief Barketing Officer, Nash Nott, at nash@nottautocorp.com or tag us on Facebook or Instagram!

Some photos provided by www.TopTierImports.com
For more information on current listings, please visit our inventory by clicking “UNIQUE INVENTORY” above.